This Malawaian man single-handedly brought power to his village, and it’s even clean energy 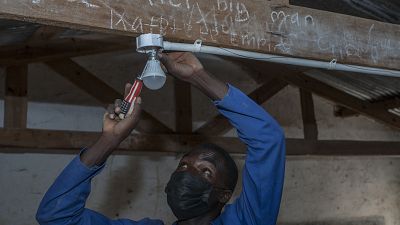 It takes a village to raise a child, but just one man to install electricity it seems.

Colrerd Nkosi grew up in a village with no electricity, like much of Malawi. After getting an education 40km away, he moved back to his village and made it his mission to make a difference to the community.

He decided to take advantage of the fast flowing river that ran past his house. He put his bicycle into the stream and found the force of the water turned the pedals.

After experimenting with dynamos, Colrerd used an old maize sheller (a machine that skims kernels of corn off the cob) to create a powerful turbine. The power generated is carried through metal cables strung between trees.

The self-taught electrician doesn’t charge his neighbours for electricity, just €1 a month for maintenance costs.

What a difference electricity makes

Having electricity means school children no longer have to do their homework by candlelight, as Colrerd did when he was growing up.

The new power supply also has an environmental benefit. “Once villages and schools have electricity…people will no longer cut down trees [for] charcoal,” Colrerd says.

He hopes to replicate his system for nearby villages.

We use cookies on our website to give you the most relevant experience by remembering your preferences and repeat visits. By clicking “Accept All”, you consent to the use of ALL the cookies. However, you may visit "Cookie Settings" to provide a controlled consent.
Cookie SettingsAccept All
Manage consent

This website uses cookies to improve your experience while you navigate through the website. Out of these, the cookies that are categorized as necessary are stored on your browser as they are essential for the working of basic functionalities of the website. We also use third-party cookies that help us analyze and understand how you use this website. These cookies will be stored in your browser only with your consent. You also have the option to opt-out of these cookies. But opting out of some of these cookies may affect your browsing experience.
Necessary Always Enabled
Necessary cookies are absolutely essential for the website to function properly. These cookies ensure basic functionalities and security features of the website, anonymously.
Functional
Functional cookies help to perform certain functionalities like sharing the content of the website on social media platforms, collect feedbacks, and other third-party features.
Performance
Performance cookies are used to understand and analyze the key performance indexes of the website which helps in delivering a better user experience for the visitors.
Analytics
Analytical cookies are used to understand how visitors interact with the website. These cookies help provide information on metrics the number of visitors, bounce rate, traffic source, etc.
Advertisement
Advertisement cookies are used to provide visitors with relevant ads and marketing campaigns. These cookies track visitors across websites and collect information to provide customized ads.
Others
Other uncategorized cookies are those that are being analyzed and have not been classified into a category as yet.
SAVE & ACCEPT

This is a demo store for testing purposes — no orders shall be fulfilled. Dismiss